Why is the rate of high-tech failure so high, and why do so many high tech companies fail? The short answer is it really comes down to a lack of customer alignment.

An in-depth analysis of the reasons behind high-tech failure

I’ve had the opportunity to evaluate the management practices of hundreds of high tech companies and here are the primary reasons:

1. Lack of Market Focus (a.k.a. Segmentation)

Emerging high-tech companies often do anything possible to generate revenue and in the process try to be all things to all people. Worried about losing business they avoid segmenting the market and refuse to focus on one or two key segments. As a result the company is unable to adequately serve any one market segment and management is suddenly swamped with support problems and competitors. High-tech products are generally used over an extended period of time, are integrated with complimentary products, and impose learning costs on the end user. As such, customers require time to digest and recover their investment in new technologies and the overall systems in which the products are used. The rapid introduction of new and improved versions can make a customer regret a previous purchase, delay all new purchases, and agonize over similar purchases in the future, none of which are in the long-term interest of the producer.

Customers view products very differently than the people who create or supply them. In technology-based companies the tendency is to try to sell products on the basis of price, special features and technical specifications. These technical factors are often favored by the engineers and scientists who typically run high-tech companies. The problem is that most customers consider factors such as product support and company reputation to be more important. So the feature rich products created by techies are seen as incomplete in the mind of the customer. Rather than competing on features alone a company should focus on the “intangible” factors that are especially attractive to most customers.

Raising too much capital before a company has proven its ability to make a profit is often a mistake. Obviously investors play a very important role in helping to grow a company once making profit has been proven as feasible. Too much capital is not inherently wrong – it just usually causes the founder to focus on investors rather than on customers.

Investors are getting smarter; it used to be they would finance ideas and now they finance the ability to be profitable.

There’s more to channel management than just matching distribution to your target customer or segment. Specific skills are required to effectively manage each type of distribution channel and those skills must be developed internally before significant selling can begin. For example, success with a dealer channel requires a top-flight sales vice president or leader who can guide account or market development, and can introduce dealers to key buyers. And once leadership skills have been developed, it is then necessary to overcome the inherent weaknesses of the dealer channel:

Read our analysis of why Seattle’s “Most Promising Startup” failed

Traditional barriers to competition, as defined by economists, are of little value in high-tech. These conventional techniques are mostly designed to prevent market entry and tend not to work in technology-based business. The most effective competitive barrier in high-tech is the perceptions held by customers, prospects, and the supporting infrastructure. High-tech failure is often the result of ignoring perceptions regarding competition.

It is easy to misinterpret the role price plays in market transformation. And it is a mistake to believe that a high-tech product would be widely used and adopted if its cost was low enough. Price reduction alone does not guarantee mainstream market acceptance.

8. Improper Use of Advertising

More money is wasted on advertising than any other marketing activity. A company cannot establish credibility or create a position in the marketplace with advertising. Advertising is also a poor choice if your target audience is skeptical or if the message you are trying to communicate is complex. Think of advertising as a way to reinforce positive differentials that already exist.

9. Misinterpretation of the Innovation-Adoption Process

There are two versions of the innovation-adoption lifecycle model. The original version (introduced in 1962 by Everett Rogers who was an assistant professor of rural sociology at Ohio State University) describes the market acceptance of new products in terms of innovators, early adopters, early majority, late majority, and laggards. The process of adoption over time is illustrated as a classic normal distribution or bell curve.

The second version was initially observed and described by Lee James and Warren Schirtzinger while working for the consulting firm Regis McKenna, Inc. It is an adaptation of the original Diffusion of Innovations curve that includes a gap in the bell curve between early adopters and the early majority. This essentially splits the adoption process into three distinct phases, an early market and a mainstream market, separated by a period of time known as the adoption gap or “marketing chasm.” 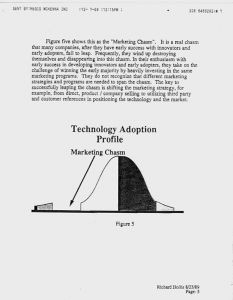 Both versions of the technology adoption lifecycle are useful tools for understanding the way markets unfold and mature. However the second version typically applies to discontinuous innovations, meaning the new product forces the user to learn new things. Both models of innovation-adoption can be used to understand high-tech failure.

This is an area of great confusion because not all high-tech products are discontinuous, in which case the original technology adoption lifecycle applies more than its successor.

Another misinterpretation occurs when marketing folks refer to a market as characterized by “all late adopters.” Because both technology adoption models are expressed in terms of a standard bell curve, it means statistically, a random sample of any given market or population must contain: 2.5% innovators, 13.5% early adopters, 34% early majority, 34% late majority, and 16.0% laggards. So even if an industry is conservative by nature, there will always be a sequence of adoption by different types of buyers.

In either case, the technology adoption model is like Chinese food–you’ll be hungry for more guidance in a very short period of time.

Companies routinely perform the wrong type of market research. Statistical surveys of customer demand do not provide the qualitative information that is needed most. Because the judgments of your target audience often rely as much on perceptions as on facts, qualitative research intended to identify existing perceptions has much greater value in assessing, planning and executing a company’s marketing strategy.

Are you in the process of making a fatal mistake? Contact me at your earliest convenience and let’s talk about what might be done.

References: 1) This is an abstract of a paper that was originally presented at the University of Washington ComputerFair Conference and was published as part of the conference proceedings.